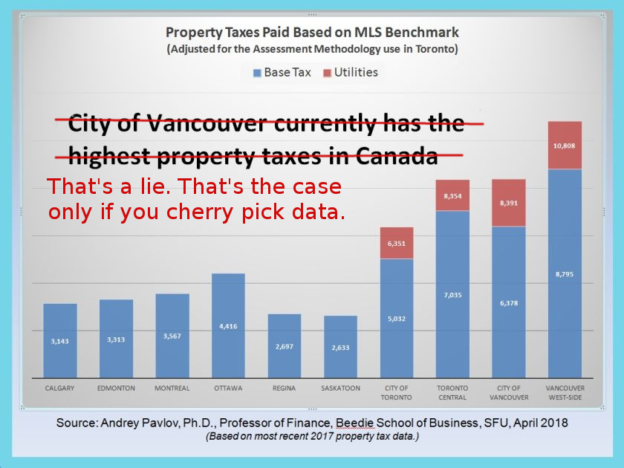 However, I stand by the statement that Prof. Pavlov’s claim “City of Vancouver currently has the highest property taxes in Canada” is a lie.

A graph produced by SFU Professor Andrey Pavlov that purports to show Vancouver as having the highest property taxes in Canada is doing the rounds on the Internet1)https://twitter.com/andrey_d_pavlov/status/996798250446286848.

Prof. Pavlov’s erroneous graph has been used as the basis for a Vancouver Sun article5)http://vancouversun.com/opinion/op-ed/elizabeth-murphy-b-c-taxes-need-a-second-look which, in turn is now being used by the opponent of BC NDP government’s housing reforms to attack those much needed reforms6)https://twitter.com/search?q=http%3A%2F%2Fvancouversun.com%2Fopinion%2Fop-ed%2Felizabeth-murphy-b-c-taxes-need-a-second-look&src=typd. Even the BC Liberals7)https://twitter.com/bcliberals/status/1000852543705006080 are tweeting Prof. Pavlov’s mendacious graph.

In the era of fake news, the public look up to academia in their search for truth. I find it disturbing and unacceptable that Prof. Pavlov has chosen to disseminate false information. Prof. Pavlov’s steadfast refusal to offer an apology and issue a correction even after being called8)https://mobile.twitter.com/1alexhemingway/status/1000246334975131648 out on his falsehoods further seek to not only diminish the credibility of Simon Fraser University, but it also undermines people’s trust in academia as a whole.

Update: Alex Hemingway, whom I cited earlier in the article, has kindly informed me that depending on how Prof. Pavlov calculated the Toronto four year average “current assessed value”, the figures used in the graph may indeed be for single family homes. Based on data obtained from sources Prof. Pavlov has mentioned, I’m unable to reproduce the good professor’s math.

If Prof. Pavlov were to reveal his materials and methods, I will be happy to update my post.

Even if Prof. Pavlov were doing an apples to apples comparison, his “City of Vancouver currently has the highest property taxes in Canada” graph is still a lie, as he does not mention anywhere on the graph that he is only using single family home benchmark values in his calculations. Even if all his numbers are correct, all that his graph shows is that “City of Vancouver may have the highest property taxes in Canada if you only consider the most expensive segment of the market.”