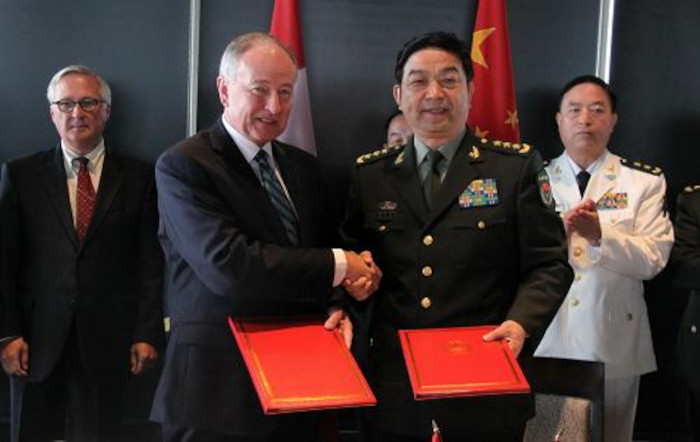 The hashtag #TrudeauTreason is trending. Why? Because Conservatives are accusing Prime Minister Justin Trudeau of inviting China’s People’s Liberation Army troops to train in Canada.

But it wasn’t Trudeau’s Liberal government that invited Chinese forces to Canada. It was former Prime Minister Stephen Harper’s government that signed the Cooperation Plan Initiative between the PLA and Canada’s Defence Team in August 20131)https://www.canada.ca/en/news/archive/2015/05/canada-defence-relations-asia-pacific-region.html.

Funnily enough, most of the information regarding the deal comes from China’s government as the Harper government kept the deal secret.

According to China’s embassy in Ottawa, Nicholson said as Canada and China share common interests in many issues, militaries of the two countries need to promote dialogue and deepen cooperation in a bid to push their relations forward continuously2)http://ca.china-embassy.org/eng/zjwl/t1072663.htm.

Nicholson’s predecessor and failed Conservative leadership contender Peter MacKay laid the groundwork for the defence treaty when he visited China two months prior, becoming the first Canadian defence minister to visit China in a decade.

“It is an honour for me to be the first Canadian Minister of Defence to visit China in the last 10 years and the first Western Defence leader to meet with the new Chinese Minister of National Defence, General Chang Wanquan,” said Minister MacKay. “This visit helped set the stage for an enhanced military-to-military relationship between the Canadian Armed Forces and the People’s Liberation Army (PLA). Our security ties are an important component of building understanding with China in a range of areas”.

This is not the only atrocious agreement with China that Stephen Harper got us into in secret. The Canada-China preferential trade agreement commonly known as FIPPA allows Chinese corporations to challenge, and repeal, any federal or provincial laws that stand in the way of those Chinese companies making profits in Canada3)https://www.international.gc.ca/trade-commerce/trade-agreements-accords-commerciaux/agr-acc/china-chine/fipa-apie/index.aspx?lang=eng. And Harper locked Canada into that agreement for 31 years with no exit clause provided.

I certainly believe Trudea could, and should, do more to decouple Canada from China. But Conservative smear campaigns painting Trudeau as being soft on China is plainly silly, when it was Harper who handcuffed us to China and threw away the keys.