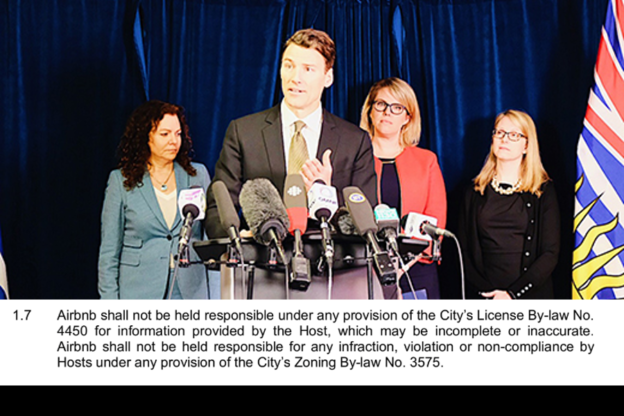 Vancouver Mayor Gregor Robertson announced last week with much fanfare that the City of Vancouver has signed a memorandum of understanding with Airbnb to help the city crackdown on illegal short term rentals.

I got a hold of the full text of the MOU1)https://drive.google.com/file/d/1fhQagqnZxXHX2DGmAysApgO5xYN0OSaa/view?usp=sharing through a Freedom of Information request. Buried inside the five pages of text is a clause indemnifying Airbnb from prosecution for the what people do on the platform.

It gets even worse. By signing the MOU, the city has agreed that Airbnb is under no obligation to remove offending listings.

1.11 The City is responsible for verifying the correctness and validity of STRA Licence numbers and exemptions posted by Hosts, and seeking enforcement against Hosts under its by-laws, Airbnb will not be responsible for removing from its platform any listings that have incorrect registration numbers or are otherwise invalid. Similarly, the City may pursue enforcement action against Hosts that have otherwise violated provisions of any City bylaws. Airbnb shall not be responsible for removing listings from its platform that belong to such Hosts that have violated provisions of City bylaws.

At a time when other cities are fining Airbnb upto a million dollars per infraction2)https://www.telegraph.co.uk/news/2016/11/24/barcelona-fine-airbnb-homeaway600000-offering-illegal-accommodation/, Mayor Robertson and the City’s General Manager of Licensing Kaye Krishna are letting Airbnb off the hook for any violations, and voluntarily giving up the power to force Airbnb to take any meaningful action.

Once again, Robertson and Krishna have betrayed the citizens of Vancouver by putting the interests of a predatory multinational corporation over those of the city’s residents.

Shame on you, Mr. Robertson. Shame on your, Ms. Krishna. Instead of trying to solve the housing crisis, you’ve just poured a tanker-load of fuel on it by crippling the city’s power to regulate short term rentals.