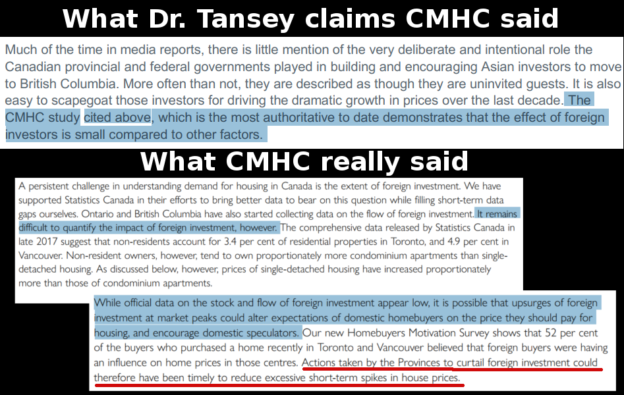 Yesterday, I demonstrated1)UBC report blaming red tape for housing crisis is based on lobby group report containing demonstrably false numbers that the report3)Growing Pains: Density, economic growth, sustainability and wellbeing in Metro Vancouver by Dr. James Tansey of UBC Sauder School of Business blaming red tape instead of foreign speculators has used a demonstrably false report as basis for estimating the impact of government regulations on housing prices.

Today we look at the second half of Dr. Tansey’s claim, i.e., that foreign buyers are having little impact on housing prices.

The CMHC study cited above, which is the most authoritative to date demonstrates that the effect of foreign investors is small compared to other factors.

Here’s what the report actually says about foreign buyers (emphasis mine):

A persistent challenge in understanding demand for housing in Canada is the extent of foreign investment. We have supported Statistics Canada in their efforts to bring better data to bear on this question while filling short-term data gaps ourselves. Ontario and British Columbia have also started collecting data on the flow of foreign investment. It remains difficult to quantify the impact of foreign investment, however. The comprehensive data released by Statistics Canada in late 2017 suggest that non-residents account for 3.4 per cent of residential properties in Toronto, and 4.9 per cent in Vancouver. Non-resident owners, however, tend to own proportionately more condominium apartments than singledetached housing. As discussed below, however, prices of single-detached housing have increased proportionately more than those of condominium apartments.

While official data on the stock and flow of foreign investment appear low, it is possible that upsurges of foreign investment at market peaks could alter expectations of domestic homebuyers on the price they should pay for housing, and encourage domestic speculators. Our new Homebuyers Motivation Survey shows that 52 per cent of the buyers who purchased a home recently in Toronto and Vancouver believed that foreign buyers were having an influence on home prices in those centres. Actions taken by the Provinces to curtail foreign investment could therefore have been timely to reduce excessive short-term spikes in house prices.

Dr. Tansey is being intellectually dishonest by claiming that the CMHC study ”demonstrates that the effect of foreign investors is small compared to other factors.” CMHC report admits that it’s difficult to gauge the impact, and suggests that even if the foreign buyer numbers are low, foreign buyers could be punching above their weight by altering the expectations of local buyers. CMHC even concludes that the BC’s and Ontario’s foreign buyer tax may have been a timely measure to cool down housing prices.

3 thoughts on “No, Dr. Tansey, CMHC report never claimed that “the effect of foreign investors is small compared to other factors””