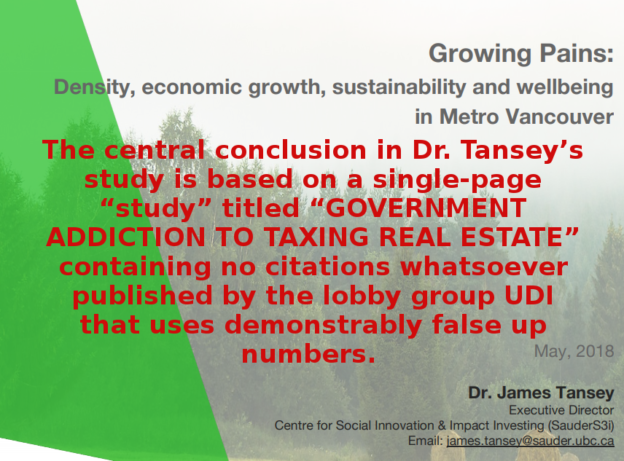 Dr. James Tansey of UBC Sauder School of Business has just published a study blaming red tape, and not foreign buyers, for Vancouver’s housing affordability crisis1)Growing Pains: Density, economic growth, sustainability and wellbeing in Metro Vancouver. Given that a recent “study” by Prof. Andrey Pavlov of SFU Beedie School of Business turned out to be a inaccurate, I decided to take a closer look at Dr. Tansey’s work.

The effect of regulation and zoning constraints in the housings sector is six times larger than the effect of speculators, according to [sic] and the largest group of property investors who by[sic] to rent is actually older domestic owners who are seeking financial returns in a low interest rate environment.

It’s not entirely clearly immediately whom Dr. Tansey is citing as the source for the claim that red tape is the main reason for the housing crisis. The answer is found on page 16:

A more detailed bottom-up analysis by property and tax experts Burgess Cawley Sullivan suggested that taxes and development fees represent $220,256 to the cost of an $840,000 apartment and $337,582 of the cost of a $1.4m three bedroom apartment.

That’s two red flags in one: A single-page “study” with a biased title with no citations whatsoever published by a lobby group. Dr. Tansey would not risk his academic reputation on such a flimsy document, so, I thought that surely he must have thoroughly vetted the “study” for its veracity.

The UDI study purports to depict the breakdown of taxes and other government fees associated with a “Typical Cambie Corridor Assembly Project”. The authors state that the the Community Amenity Contribution(CAC) is $115 per square foot of buildable area of net additional density. They don’t cite a sources for this figure, and, it soon becomes apparent why.

The City of Vancouver published3)COMMUNITY AMENITYCONTRIBUTIONS – THROUGH REZONINGS exactly how much the CAC is for the Cambie Corridor. It is $68.18 per square foot.

A kind reader has pointed out to me that there’s another glaring error in the UDI “study”. Empty Homes Tax applies to neither “property undergoing redevelopment” nor “under review for redevelopment of vacant land.”4)Will your home be taxed?