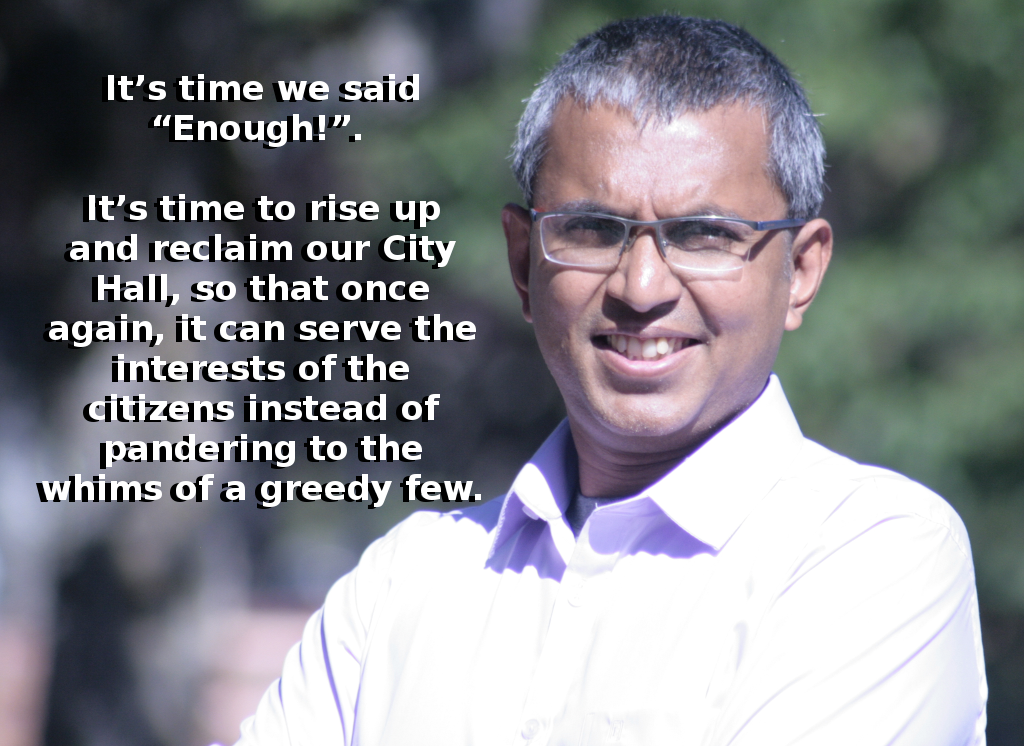 I hear from my fellow Vancouverites everyday about how they’re being thrown out onto the streets to make way for luxury condos that remain empty as safety deposit boxes in the sky. I hear from friends and neighbours about being renovicted as their landlords turned entire rental towers into illegal Airbnb hotels.

Vancouverites are fed up with a City Hall that kneels prostrate before the greedy few who profit off the citizen’s misery.

Developers like Westbank are brazenly yelling to the world “Vancouver’s becoming a safety deposit box for the global rich!” as a sales pitch with no fear of consequences.

Why would Westbank fear any consequences?

After all, Westbank’s owner Ian Gillespie is Mayor Gregor Robertson’s buddy and a Vision Vancouver bankroller.

Gillespie’s correct. Vancouver is becoming one giant resort for the global rich to gamble with our homes as their chips. Vancouver is also becoming a giant washing machine to launder the proceeds of transnational crime.

As the raging opioid crisis kills thousands of our citizens every year, the fentanyl dealers are making a killing speculating on our homes.

I have had privilege of mentoring promising young students at our universities and colleges. But many are forced to leave Vancouver upon graduation, forcing them away from where they were born and raised and away from their families. The salaries in Vancouver, even in the tech sector, are among the lowest in Canada. The cost of housing – whether you seek to buy or rent – is among the highest. Our citizens who contribute to the city while paying for taxes that pay for all the great public goods – I’m talking about our teachers, nurses, our friends in the trades and pretty much every other worker – are struggling to make ends meet.

The exodus of talent and the hollowing out of our neighbourhoods mean that local businesses are unable to stay afloat. The boarded up storefronts that line once busy thoroughfares in Vancouver seem straight out of a set of a post-apocalyptic dystopian movie.

And as local businesses are shutting shop, multinational chains are taking their place. Instead of hiring locals and paying them a living wage, these large corporations are importing indentured labour under the highly exploitative temporary foreign worker program.

What saddens me the most is that, I know Vancouver has the potential to be a global hub of commerce, innovation, science and art. Yet, we have now become world famous for the “Vancouver model” of money laundering.

The real estate industry – I’m talking about the developers, marketeers and realtors – have been the greatest beneficiaries of the fentanyl-fuelled housing crisis. The industry has poured millions of dollars into the coffers of both Vision Vancouver and NPA. In turn, the mayor and the council have stubbornly refused to take any meaningful action to stop our beloved city turning into a laundromat for all the world’s dirty money.

I, along with scores of other housing advocates, have spent countless hours presenting to City of Vancouver simple common sense solution to address the issues such as Airbnb licence abuse and presale flipping. But we feel that we’re hitting a brick wall at every turn. It’s blatantly obvious that the City Hall under Vision Vancouver leadership is protecting the interests of transnational criminals and the real estate industry instead of promoting the interests of the citizens.

It’s said that change must come from within. That’s why I’m running for Vancouver City Council at the upcoming elections with David Chen and the ProVancouver team.

When I’m elected, here are the five motions that I will table at Vancouver City Council within the first 100 days.

Motion 2: Completely ban on Airbnb, until such time the company learns the meaning of corporate citizenship and agrees to a new memorandum of understanding which ensures platform accountability.

Motion 3: Establish a startup accelerator which will finance and nurture young innovators, thereby enabling the city to be partners in their success.

Motion 4: Vancouver will set up a city-wide job seeker database and work with Service Canada to ensure that when businesses apply for temporary foreign worker permits, they’ll be matched with a qualified local worker first.

Motion 5: Establish a special Vancouver Police Department task force to investigate crime in the real estate industry and bring the perpetrators, who are currently acting with absolute impunity, to justice.

Dear friends, for too long we have seen successive municipal governments gut the heart and soul of our city by allowing proceeds of transnational crime to chase away our honest hardworking citizens. Our politicians are gleefully lining their pockets by betraying the ones who elected them, while promoting the interests of the industry that bankrolls them.

It’s time we said “Enough!”. It’s time to rise up and reclaim our City Hall, so that once again, it can serve the interests of the citizens instead of pandering to the whims of a greedy few.

The battle for Vancouver will be not be a walk in Stanley Park. The cancer of cronyism has metastasized in every organ of city government. But we’re Vancouverites. We’re resolute. We’re tenacious. We’re defiant in the face of even the greatest adversity.

We shall take back the City Hall and rebuild Vancouver as a city where innovation and hard work is rewarded, where families can thrive, and our bright young minds can fulfil their true potential.

Dare to dream, my friends, dare to dream of a free and prosperous Vancouver known world over as a great city shining bright on Canada’s western shores as a beacon of integrity in world riddled with corruption and greed.

And we shall not give up until every Vancouverite is liberated from the clutches of these transnational criminals who’ve laid siege on our city. The sounds of children’s laughter will once again ring through our playgrounds.