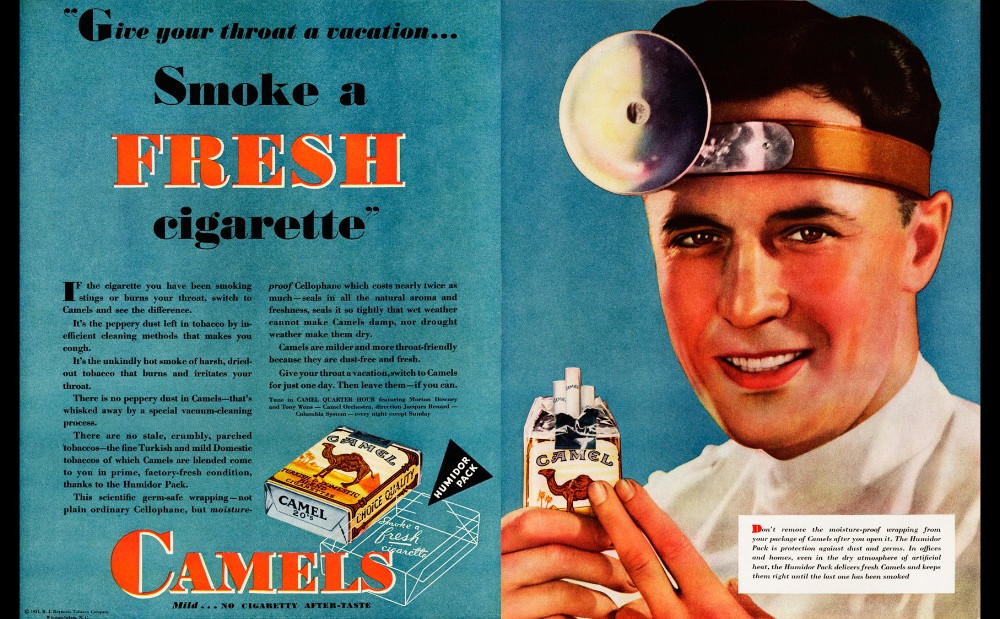 The use reductio ad Hitlerum — a logical fallacy in the form “Hitler did X, therefore anyone who does X is a Nazi”1)http://researchonline.lshtm.ac.uk/1874/1/How%20the%20growth%20of%20denialism%20undermines%20public%20health%20_%20The%20BMJ.pdf — is a common tactic used by the tobacco industry and its front groups to fight tobacco control measures such as smoke-free public places and stronger cigarette advertising restrictions2)https://www.ncbi.nlm.nih.gov/pmc/articles/PMC2736555/.

UBC sociology professor Nathanael Lauster tore a page out of the tobacco industry propaganda playbook on Remembrance Day by tweeting that discussion of foreign buyers’ impact on making houses unaffordable to local workers in Vancouver was the slippery slope to “National Socialism”.

A charitable read (and hence, probably a good read). But my concern is that this effort mirrors how you move from “socialism” to “national socialism.”

For tobacco industry, the use of Nazi rhetoric is a last desperate attempt to stifle government regulations in the face of overwhelming evidence that show tobacco control measures have remarkable public health benefits.

Likewise, the real estate industry is keen to stifle any government regulations that restrict foreign buyers in Vancouver’s real estate market in the face of evidence3)https://www.theglobeandmail.com/real-estate/vancouver/article-oxford-academics-research-suggests-vancouvers-foreign-buyers-tax-has/ that show measures introduced to tackle global speculation in the housing market have significantly improved housing affordability for local workers.

Lauster, after all, is a leader in Vancouver’s YIMBY — Yes In My Back Yard — movement, whose core tenet is that rezoning as much of the city as possible for market-rate condo and apartment towers will solve the affordability crisis.

As the cheerleaders of the real estate development industry, the YIMBYs are adept at using pure neoliberal sophistry4)https://www.salon.com/2018/11/04/despite-thorough-debunking-neoliberal-housing-politics-prevail-in-the-bay-area/ to convince public that rezoning for density is panacea for all social ills despite the compelling evidence that building market-rate housing worsens affordability for the working class5)https://sf-planning.org/sites/default/files/FileCenter/Documents/8380-FINAL%20Resid%20Nexus_04-4-07.pdf leading to social cleansing social cleansing — the systematic large-scale removal from a region of members of a social class deemed undesirable.

“The argument for density has become entrenched in planning discourse as a solution to many environmental, social, and economic ills,” Dalhousie University’s Meaghan Dalton explains6)http://theoryandpractice.planning.dal.ca/_pdf/multiple_plans/mdalton_2017.pdf. “However, the original intent of density may be forgotten, as policies and planners argue for density without supportive evidence, or even contrary to research findings.”

It’s frightening that, Lauster, a man who should know better as an academic at such an august institution, would resort to Reductio ad Hitlerum attacks to stifle debate that could result in BC NDP government tightening rules around foreign property ownership further.

It’s worth noting that Lauster has positioned himself as an expert on the matter, going so far as to provide expert testimony in support of the foreign buyers suing the Province of British Columbia to get the foreign buyer tax repealed.

At the same time, that even such a learned man is unable to come up a better argument than “but the Nazis did it” should make it clear that the denialists have lost the debate over the impact of global money in Vancouver’s housing crisis.