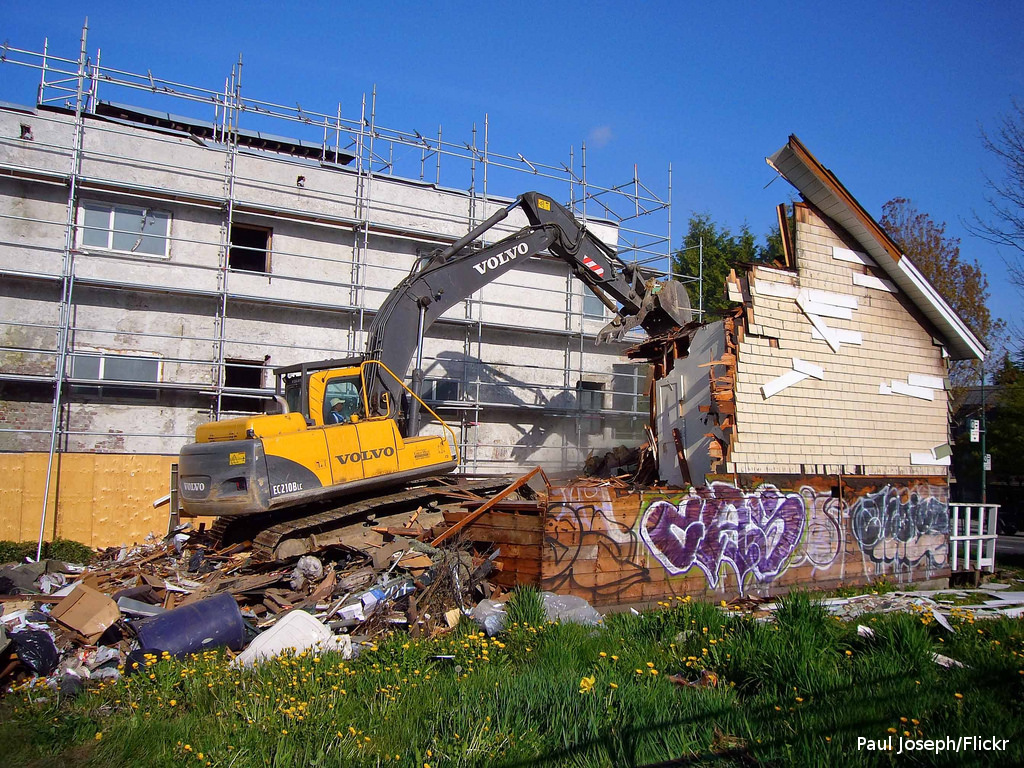 Go to any public hearing at Vancouver City Council for a market-rate housing project and you’ll see a group of angry millennial men, dorky in appearance, yuppie in dress and frat boy in behaviour.

They will come up to speak at the podium one after another in a well-rehearsed ritual.

“RS-1 (single family) neighbourhoods are the bane of humanity,” each will pontificate. “Single family homeowners are evil incarnate.”

Ask the YIMBY — Yes In My Back Yard — movement to explain how building market-rate housing helps affordability, and they will swiftly block you1)https://twitter.com/mtnbvan/status/1061299506006900736.

That’s because, as Keith A. Spencer explained in his Salon Article, YIMBY philosophy is nothing more than a form a pure neoliberal sophistry2)https://www.salon.com/2018/11/04/despite-thorough-debunking-neoliberal-housing-politics-prevail-in-the-bay-area/.

As Spencer pointed out, the 2007 San Francisco Planning Commission study3)https://sf-planning.org/sites/default/files/FileCenter/Documents/8380-FINAL%20Resid%20Nexus_04-4-07.pdf refutes the central tenet of the YIMBY ideology that rezoning as much of the city as possible for market-rate condo and apartment towers will solve the affordability crisis.

Question the faulty logic that the YIMBYs use to justify densification, and they will immediately label you a NIMBY and attack you mercilessly. Academics, journalists, politicians and citizen activists who are fighting to make Vancouver affordable for the working classes have all come under vicious YIMBY attacks.

YIMBYs don’t attack ideas — they attack the person. And the YIMBYs fight dirty, even going as far as to carry out of racist smear campaigns against housing activists of colour who call out the absurdity of their logic.

The only beneficiaries of densification in Vancouver are the people in the real estate industry: the developers, realtors, and financiers. They stand to make obscene profits turning working class neighbourhoods into empty condo towers to be used as safety deposit boxes in the sky for the global rich.

As the big developers gentrify neighbourhoods, the working class families will be priced out further and further away into the valley. Some will end up spending four hours a day commuting between work and home, taking away precious time they could be spending with their children.

This social cleansing — the systematic large-scale removal from a region of members of a social class deemed undesirable — accelerated during Vision Vancouver reign, as the City Council rezoned ever large sections of the city for luxury condo towers eroding affordability with each project.

How did the politicians and the bureaucracy manage get away with it for so long?

“The argument for density has become entrenched in planning discourse as a solution to many environmental, social, and economic ills,” Dalton found. “However, the original intent of density may be forgotten, as policies and planners argue for density without supportive evidence, or even contrary to research findings.”

Why has YIMBY ideology, with such brittle logic, been able to provide political cover for real estate profiteering so effectively?

“The fetish of density may be due to the pervasive forces of neoliberalism and may be the one tool planners feel they can cling on to for potential positive impacts,” Dalton explains in her working paper. “In a climate where governments have rolled back support for public housing, planners may feel they have no direction to turn except for the contested economic argument that greater density (thus more supply of housing) will lead to more affordable housing prices.”

Social cleansing for profit isn’t hip. Neoliberals wanted a find a way to make it palatable to the masses, so, they nurtured the YIMBY movement. The YIMBY white knights then marched in to slay the dragons of logic and rescue the developers in distress. Because the YIMBY web of sophistry wasn’t particularly difficult to unravel, they embarked on a campaign of ad hominem attacks against anyone who dared called out their logical fallacies.

The future, however, looks bright for housing activists who are fighting to make cities affordable for the working classes. Voters overwhelmingly rejected YIMBY candidates — who received generous donations from the real estate industry — both in Vancouver and San Francisco.

Expect them to fight dirty to the bitter end.