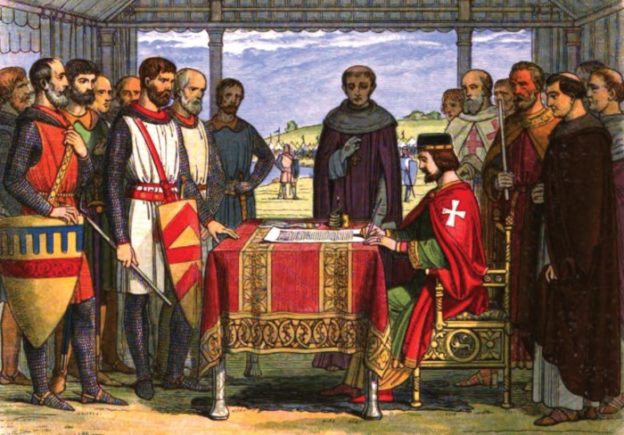 Theresa May today promised to rip human rights into shreds in the name of fighting terrorism – the very terrorism for which she’s at least partially responsible through her gutting of the police service, support of the illegal invasion of Iraq leading to the creation of ISIS, and her continued support of and weapon sales to Saudi Arabia, the number one promoter and financier of Jihadi terrorism.

The right to due process, a right that Theresa may wants to take away from you, is a right that is enshrined in the Magna Carta signed in 1215. For eight hundred years, many monarchs, wars, and political upheavals later, the right of due process remain one of your greatest gifts to human civilization.

It’ll be a tragedy to see those human rights die in their birthplace. But that’s precisely what will happen if, through omission or commission, the Conservatives are re-elected on Thursday.

But you have one final chance to protect those rights and freedoms.

Jeremy Corbyn warned us that gutting the police service would make it hard to prevent terror attacks. He also warned us that the invasion of Iraq would lead to a spiral of misery and conflict leading to terrorism. He warned us about the consequences of aiding and abetting repressive regimes such as Saudi Arabia.

Even if one cynically dismisses Corbyn for being an idealist for wanting to achieve world peace, end poverty and save the planet, it’s worth bearing in mind that the man has risked his own freedom to protect the freedoms of others, such as the time when he was arrested for protesting against apartheid in South Africa.

On Thursday, you get to choose between man who has spent his entire adult life fighting for our fundamental freedoms, and a woman who feels that human rights are obstacles that need to be bulldozed away in posthaste to clear the glorious path to strength and stability.

I hope you chose freedom over fear.

4 thoughts on “Dear UK: You gifted the world human rights, please vote to protect them”