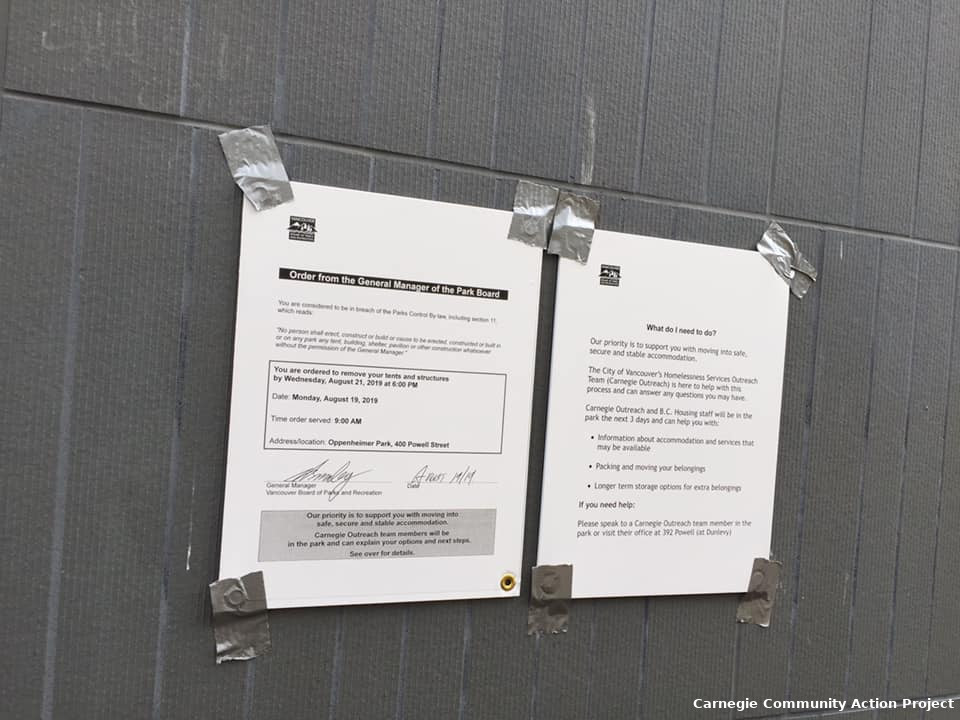 I oppose this motion because it prioritizes forced decampment and offers no concrete solutions to house the residents of the tent city.

What’s the main difference between the Oppenheimer Park tents and downtown condos? There are people living in the tents.

You can’t resolve Oppenheimer issue because the tent city is not the problem. It’s merely a symptom of a city that has lost its moral compass.

There are enough empty homes to house the homeless 10x over. And more.

But instead of finding urgent action to help the homeless, you have decided to find ways for “urgent decampment” – very fancy way of saying throwing the people out into the streets.

We must recognize that the homeless are human beings. Treat them as human beings: with respect. With dignity. With compassion.

Most of us working class folks in Vancouver are one layoff away from homelessness. Most seniors are one renoviction away from finding themselves on the streets.

Nearly 40% of Vancouver’s homeless are indigenous. Do you really want to displace again the survivors of displacement and transgenerational trauma?

Instead of prioritizing “decampment”, I urge you to acknowledge that the Oppenheimer Park, and homelessness in Vancouver in general, is a humanitarian crisis that requires immediate action above and beyond what has been done until now.

I ask you to direct staff to work with partners and consult with Oppenheimer Park residents about an accessible alternate site that ensures health and safety, access to services and supports, and is acceptable and appropriate for people currently living in Oppenheimer Park, including access to a community kitchen, electricity, funding for peer support, storage facilities, 24-hour sanitation facilities with running water, and a warming tent in Oppenheimer Park or other indoor site near downtown eastside services.

I implore you to direct city officials to attend weekly resident led safety meetings and that the City encourage representatives of other jurisdictions including VPD staff and the Park Board to do this too.

I urge you to convene emergency homelessness task force meetings of elected Federal, Provincial, City, Park Board members, and invite the Union of BC Indian Chiefs and people who are homeless and their representatives, to make short and longer term plans to ensure that all currently unsheltered people without homes have a place to be safe and warm for the winter and to get proper housing as soon as possible.

The work of the emergency homelessness task force should include:

i. Providing new housing options for Oppenheimer park residents and other unsheltered people who are homeless, and/or buying or leasing one or more hotels while ensuring appropriate housing for women and for Indigenous women and children, until proper housing can be built;

Please note: My this speech incorporated verbatim parts of Jean Swanson’s motion Emergency Action to Support Vancouver’s Homeless People, Including Those in Oppenheimer Park, after that motion was killed by Mayor Kennedy Stewart.