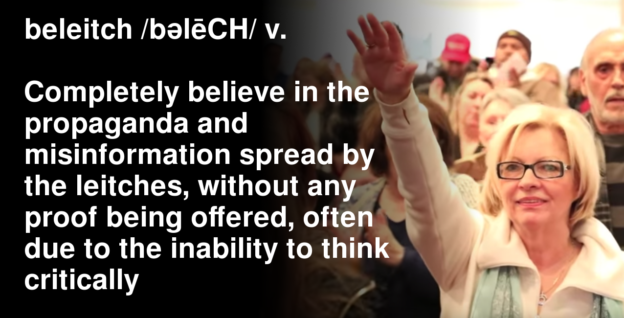 leitch /lēCH/ v. Divide people along racial or religious lines by whipping up fear and hatred, often through the use of propaganda and misinformation, in order to gain or remain in political power.

Adolf Hitler became the Chancellor of Germany in 1933 by leitching. Donald Trump leitched his way to the White House in 2016.

Chris Alexander was called out as a leitch for insinuating that Canadian women who wear niqabs may be terrorists.

beleitch /bəlēCH/ v. to completely believe in all propaganda and misinformation propagated by the leitches, without any proof being offered, often due to the inability to think critically

Many Trump supporters beleitched that Obama was planning to take away their guns and declare Sharia law.

The beleitchers at The Rebel rally greeted Kelly Leitch with Nazi salutes.

unleitch /un’lēCH/ v. Uniting people divided by the leitches by proving, through the use of facts, logic and reasoning, that assertions made by the letiches and beleitchers are false.

Canadians lauded Calgary mayor Naheed Nenshi for his efforts to unleitch Canada in the run up to the 2015 election as Harper’s leitching lead to racially motivated attacks against minorities.